The Art and Identity of April Werle

APRIL WERLE IS UNCONVENTIONAL. Growing up biracial in the predominantly white city of Helena, Montana already set her apart from the majority. But when she broke from her family’s expectations and dropped out of architecture school to pursue a career in freelance art she severed all expectations.

April’s first mural was finished in Morocco in 2018. While traveling abroad in Thailand on a 7-month trip roughly a year later, she began trading her talents for room and board, where she stumbled upon an as-yet-undiscovered passion for painting murals which she later turned into an artistic career in Missoula, MT.

April is rising in popularity around Montana. She has painted murals for Drum Coffee, a very Missoula-esque espresso bar, and the Giggle Box, an interactive art museum at the Southgate Mall, and has recently been selected by the Zootown Arts Community Center for an alleyway commission in the city’s downtown.

We sat down for a conversation about identity, inspiration, and the business of independent art in the time of social media and COVID.

April Werle: I started painting my last year of art school. I was working with house paint and then after I graduated from school I had to start figuring out how to use fine art paint and mediums and glazing on my own. I feel like there are so many things I wish I had learned in art school that I didn’t.

Do you think it would have been better for art school to have a full class on the technicalities of using those paints?

Well, actually it was my fault, not the art school’s fault. I got away with my painting credits in Malaysia. So I didn’t do a painting class here [at the University of Montana], where I feel like everyone learned that stuff. I never thought that I would be painting.

What did you think you would be doing?

In art school I was using surreal backgrounds as settings for portraits. My dad showed me this art piece I made in 5th grade or 4th grade of the Green Day hand but with a cloud and a thunderbolt. It’s just like, holy shit, we just don’t change that much over time. Fifteen years later I somehow circled back to creating that scene.

A lot of artists tend to spend their entire careers trying to communicate one idea. There’s always different variations of it and they’ll dance around that idea, but there’s always one specific thing that permeates throughout their work.

Yeah, but I was always under the impression that you worked up to it and found that one thing. But, after seeing that piece I realized that I didn’t work up. I’ve actually just been dancing around for fifteen years and found myself coming back around to the thing I started with.

Do you feel like you wasted that time deviating from that subject instead of using that time to perfect it?

I think it’s the natural progression.

What were some other ideas you’ve tried to express in those fifteen years?

I did a whole series on the SPAM can because Filipinos love SPAM, and I was trying to use that as a way to reference my heritage.

No, I was cutting them up and arranged them in a nice compositional way. To me, I was seeing these backgrounds as these abstract settings, but there was some point where I realized that other people weren’t seeing them that way. So after a visit with my dad, who’s a landscape painter, I realized that I should just use abstract landscape elements to make it more obvious. I think my painting has gotten a lot better.

How much of a Filipino presence is there in Helena, Montana?

It’s getting way bigger. When I was a kid there were like ten moms and all of us kids grew up together, but now there are so many that there’s drama between them.

Well, because most of them are married to military men. My dad’s not (military) though.

So how did your parents meet?

They had an arranged marriage. My aunt was married and living in Townsend and my dad went to the same church as her and he was looking for a wife. So my mom agreed to it. She wanted to become a nun, she became a mom instead.

Coming from a devout background, how does she feel about you being an artist?

She’s had a really hard time with it. When I was little my art teacher recommended that I go into art, so the whole family kind of decided I would go into architecture because in Helena we have this big mansion district and one of my favorite things to do was walk around and look at houses.

What would non-artist April look like and what would she be doing?

I have no fucking idea. I don’t even know who that is. I’ve been drawing and writing stories since I can remember. I’ve always had a really strong imagination. I have no idea, maybe I would be an architect.

Your backgrounds bear a lot of similarity to the Russian Suprematism art movement, were you inspired by that style?

I don’t know anything about Russian Suprematism. I know Kandinsky. There’s a lot of movement in his art and the geometric shapes, that makes sense.

The main idea of the Suprematist movement was to create an image which is a supreme expression of a feeling without relying on objects to dictate a narrative. Does that come close to your ideas?

I think my work just naturally expresses how I’m feeling. I have noticed that my color pallet changes the most. In the winter my pallets become super muted and there’s not a lot of contrast, and when the sun comes out I have a lot more vibrancy.

So who were your biggest inspirations?

My very first favorite artist was Dali. He was the first non-traditional artist that I ever saw. But, I’ve always loved the romanticism of Baroque painting and the renaissance because my mother’s catholic and I just loved how profound the artwork was. My favorite artist right now is Michael Reeder. (@reederone) If you look him up, you’ll see the inspiration. And he messages me back! I asked him once, on instagram, how he masks and he sent me back, like five paragraphs.”

What is the business side of your art?

There are so many routes and it’s all about figuring out what you want to do specifically.

I don’t really make art for myself, I think. I have a show I am working on but I haven’t had a lot of time. I’ve been working a lot of commissions and proposals and a showing is such a commitment of time and money and then you might not even sell anything. I did a total of 14 shows in one year, just First Fridays in Missoula and Bozeman. I sold maybe one piece out of all those shows. Everything I’ve sold has been on instagram. First Fridays are really good when you’re just beginning and you want to get your name out there, but they didn’t really pay my bills.

Do you feel concerned that you will lose yourself in the business aspect if you have to continue your art as a commodity?

No, not really. Because no one really asks for anything specific. I sell commissions by size and then sometimes someone will ask for a specific color to be used. People seem to understand what I do.

How do you meet people who are interested in purchasing art or commissions?

It’s hard to transition into promoting yourself, it feels really dirty to start. But the more you do it the more you see that your instagram is like your business page too. It still feels dirty though.

I’ve noticed that you’ve been using more woodgrain in your backgrounds recently, is there a symbolism?

I’ve been using the birch because of its resemblance to skin. There’s something about that nakedness and purity of the wood. I’ve used it so much now I don’t even think about it.

Is it just birch wood?

It really lends to the whimsical nature that I try to create in my pieces. And it’s pretty much the same color as my skin.

Why hands specifically? Why not use full figures?

When I was younger I was only drawing hands. I liked that they said so much. There’s narrative in every little hand gesture. Hands are just so universal, you can’t tell by looking at the hands if they’re male or female. They’re painted in black and white so there’s no race associated, they’re just a universal symbol for being human.

I have like a Michelangelo hand that I use, and at first it was showing up with a water drop. I named that hand Connection, and sometimes it faces away and that’s Disconnection. All the hands have a staple identity.

Is Missoula a good place for muralists?

It is just really nurturing and I’ve put so much work into this community that it’s hard to leave that. It’s growing and I want to grow with it. 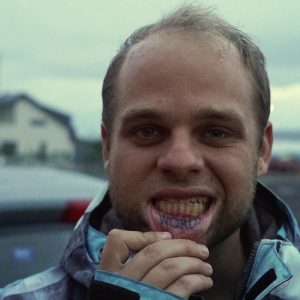 Asa Thomas Metcalfe is a published poet and short story writer from Vermont. He is currently studying journalism at the University of Montana.