Marke but this flea, and marke in this,
How little that which thou deny’st me is;
It suck’d me first, and now sucks thee,
And in this flea, our two bloods mingled bee;
Thou know’st that this cannot be said[5]
A sinne, nor shame, nor losse of maidenhead,
Yet this enjoyes before it wooe,
And pamper’d swells with one blood made of two,
And this, alas, is more than wee would doe.

Oh stay, three lives in one flea spare,[10]
Where wee almost, yea more than maryed are.
This flea is you and I, and this
Our mariage bed, and mariage temple is;
Though parents grudge, and you, w’are met,
And cloysterd in these living walls of Jet.[15]
Though use make you apt to kill mee,
Let not to this, self murder added bee,
And sacrilege, three sinnes in killing three.

Cruell and sodaine, hast thou since
Purpled thy naile, in blood of innocence?[20]
Wherein could this flea guilty bee,
Except in that drop which it suckt from thee?
Yet thou triumph’st, and saist that thou
Find’st not thy self, nor mee the weaker now;
‘Tis true, then learne how false, feares bee;[25]
Just so much honor, when thou yeeld’st to mee,
Will wast, as this flea’s death tooke life from thee. 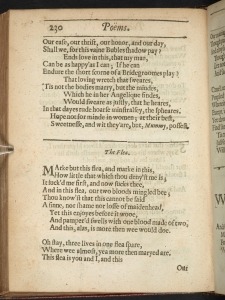 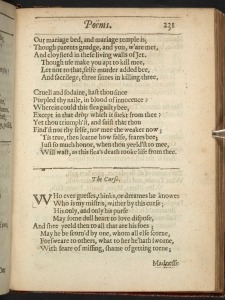 JOHN DONNE IS HORNY, and, like a flea, John DonneTechnically, it’s improper to conflate the author of a work with the work’s narrator. However, in this analysis, I’m replacing “narrator” with the poet’s name, simply because it’s a great name: John Donne — like dong.Hee hee. Even so, as I attribute the poem’s perspective to the name “John Donne” I’m not literally claiming John Donne, the author, as the poem’s narrator. Don’t @ me. persistently pesters his beloved to submit to his penetration in his strangely erotic, Metaphysical love poem “The Flea”. Presumably composed circa Donne’s secret marriage to Anne More in 1601, “The Flea” depicts a three-part scene in which Anne MoreAgain, just go with it. stoically dismisses (or flicks) Donne’s desperate pleas for sex. Donne’s method of seduction is witty and intellectual: rather than appeal to Anne via romance or emotion, Donne employs logic and reason, using the flea as a metaphorical stand-in for marital union. Donne elevates the flea’s bite from commonplace nuisance to conjugal ceremony. With this, John Donne, the poet, satirizes his sexual frustration and romantic ineptitude. English poet John Dryden (born 1631, the year John Donne died) pins Donne’s logic-based eroticism as an idiosyncrasy of (what would later be termed) Metaphysical poetry:

Donne affects the metaphysics not only in his Satires, but in his amorous verses where Nature only should reign, and perplexes the minds of the fair sex with nice speculations of philosophy when he should engage their hearts and entertain them with the softnesses of love.

Within the poem’s three stanzas, Donne verbally appeals to his beloved. Anne, who occupies the empty space between the stanzas, responds silently, ironically having the final say over her desperate seducer.

The poet starts abruptly and informally: “Marke but this flea” — intimately addressing both the audience and the beloved like a showman taking a private stage — “and marke in this, / How little that which though deny’st me is;” (1-2). That Anne has already “deny’st” Donne his sexual advances prior to the opening line sets the poem’s comedic tension: “The Flea” is Donne’s futile attempt at extracting a “yes” from “no” through an almost lawyer-like rebuttal. (Donne is courting Anne by taking her to court, so to speak; wherein Anne is simultaneously prosecutor, defendant, and judge.) “It suck’dThe long “s” that’s written as “f” (or ſ) in the poem’s original printing makes “suck’d” appear as “fuck’d” in modern spelling, which, funny enough, nails the metaphor more straightforwardly. me first, and now sucks thee, / And in this flea, our two bloods mingled bee;”: like a marriage ceremony, wherein two persons symbolically become one, the flea “mingles” Donne’s and Anne’s blood into a single essence (3-4). The image invokes a sense of spiritual and sexual transformation, calling to mind the bloody loss of virginity; yet, the flea’s blood-theft comes at no “sinne” nor “shame” on Anne’s part. Her “maidenhead” (or hymen) remains intact, signifying purity in Protestant England (6). Donne paradoxically minimizes Anne’s “losse of maidenhead” by the smallness (“How little” 2) of the flea while also overburdening the tiny insect with intense meaning (“[swollen] with one blood made of two” 8). The flea is both everything and a grain of salt all at once.

“Yet this enjoyes before it wooe,”: what’s more, the flea takes pleasure (“enjoyes”) without first “wooing” Anne; a point of frustration for Donne who admits “this, alas, is more than wee would doe” (7, 9). The poet reassures his beloved that sex, or pleasure, must be mutually enjoyed between the two. Donne, a civil man, will not “enjoy” Anne by force, like an animal — or insect. Yet, it’s hard not to detect notes of self-pity and jealousy towards the flea in the “alas” of the first stanza’s final line.

During the blank space between stanzas one and two, Anne attempts killing the flea.

“Oh stay,” the poet urges, entreating his beloved: “three lives in one flea spare” (10). Anne’s callous dismissal of the flea causes Donne to double-down on the flea’s vital importance to their relationship: “This flea is you and I” (12). That the flea represents “three lives” — Donne, Anne, and the flea itself — comically elevates the bugger to a sort of Holy Trinity. The poet alludes that, through the flea’s bites, the “three person’d” Christian GodLater in life, after Anne More’s death, John Donne converted to the Church of England, refocusing his artistic and erotic energy toward religion. His poem “Holy Sonnet XIV” demonstrates the strange tension between his faith and sexuality as he addresses God with an almost sexually masochistic tone. The opening lines: “Batter my heart, three-person’d God; for you / As yet but knock, breathe, shine, and seek to mend; / That I may rise, and stand, o’erthrow me, and bend / Your force to break, blow, burn and make me new.” recognizes and sanctions their union as husband and wife (12-13):

This flea is you and I, and this
Our mariage bed, and mariage temple is;

The divine flea sanctifies and protects their pseudo-marriage, which safely rests “cloysterd” in the bug’s “living walls of Jet” — the flea’s outer, black shell — a protection against, again, a Protestant England where “parents grudge” at the loss of a daughter’s maidenhood, or purity (14-15).

Yet, within their “cloysterd” sanctuary… trouble in Donne’s imagined paradise (16-18):

Though use make you apt to kill mee,
Let not to this, self murder added bee,
And sacrilege, three sinnes in killing three.

By the poet’s claims, “use” (or routine/familiarity) renders Anne indifferent to Donne’s passion; an indifference tantamount to murder from Donne’s frenzied perspective. What’s worse, Anne’s current indifference, manifested in her motion to kill the flee, threatens not only suicidal (“self murder” 17) obliteration of their mingled bloods but a “sacrilegious” affront on the three person’d flea God, whose triple murder amounts to “three sinnes” (18). In other words: do you have any idea what the hell you’re doing, Anne??

Between stanzas two and three, Anne kills the flea.

“Cruell and sodaine” (sudden): downtrodden but not yet defeated, Donne accuses Anne of cruelty for “purpl[ing]” her nail with the flea’s “blood of innocence” (19-20) — a crime on par with the crucifixion of Christ. The poet continues with mock-horror at Anne’s tyranny, pestering her with further questioning: “Wherein could this flea guilty bee, / Except in that drop which it suckt from thee?” (21-22) — i.e., God is dead, Anne, and you killed Him. Yet, in a funny twist of logic, Donne reverts back to the trivial smallness of the flea as a sort of “A-ha!” counter to Anne’s point that neither “thy self” nor “mee” are “the weaker now” for the flea’s blood-theft and murder (24-27):

‘Tis true, then learne how false, feares bee;
Just so much honor, when thou yeeld’st to mee,
Will wast, as this flea’s death tooke life from thee.

The poet twists his beloved’s words in his favor: “‘Tis true” that neither are “the weaker now”, and so what’s the big deal? If the loss of blood by flea means little, then what “feares” remain of the loss (“wast” 27) of “honor” (Anne’s maidenhead) by yielding to Donne (25-26)? With that, the poem ends not on a cliffhanger but in Anne’s continued, impervious silence.

Just as the flea comprises “three lives in one”, so, too, does the poem “The Flea” fit three stanzas into a whole. Form and content unite, representing the male voice in the written word and the woman’s overwhelming, all-consuming silence in the surrounding blank space. Formally and thematically, “The Flea” shows masculine verbal appeal amounting to just an annoying flea’s bite against the girl’s frosty, feminine shoulder.

The Personal is Not the Political