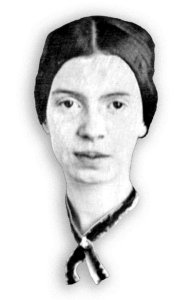 “Because I could not stop for Death”

Because I could not stop for Death —
He kindly stopped for me —
The Carriage held but just Ourselves —
And Immortality.

We slowly drove — He knew no haste[5]
And I had put away
My labor and my leisure too,
For His Civility —

Or rather — He passed Us —
The Dews drew quivering and chill —
For only Gossamer, my Gown —[15]
My Tippet — only Tulle —

EMILY DICKINSON’S POSTHUMOUSLY PUBLISHED “Because I could not stop for Death” gives us an early example of the cool, cig-inhaling disregard towards death that would come to dominate much of American hip culture. Death for the poem’s narrator — if not Emily Dickinson — is not a grand, feared event; it’s just something that comes along. Which seems a redundant observation, seeing that death is just something that comes along for everyone; but then, of course, there’s suicide. And if the narrator’s emotionally detached, languid, solemn tone is any indication, suicidal ideation — or, at the least, post-life pondering — prostrates the narrator to death. The ghostly narration eerily parallels its posthumous publication: for both Emily Dickinson and the narrator, the poem’s story is revealed from beyond the veil that conceals eternity — the mysterious afterlife.

This is how E.Dick’s poem starts: with death — or, more accurately: murder. The unnamed “I” falls victim to a courtly gentleman, who seduces (via his “Civility” 8) and murders her. “Because I could not stop for Death — / He kindly stopped for me –” (1-2). Death, here, is personified as “He”, the civil man — yet, the analogy cuts both ways: not only is her seducer deathly but death is seductive. It’s a funny, disturbing affront on our sensibility: her inability, or reluctance, to “stop” (i.e., end her life — literally or symbolically) is overpowered by the man’s “kindly” approach (2). It’s funny for the ironic, tongue-in-cheek use of “kindly”, as we’re apt to view murder not as a kindness but an injustice. Yet, it’s disturbing that, in death, the narrator views her murder as a kindness, complicating her role as a victim — at least subjectively. “The Carriage held but just Ourselves — / And Immortality”: like Dracula’s vampiric seduction of women, the carriage-driver promises some form of everlasting life (“Immortality” 4), delivering it by way of eternal death (3-4). The woman acquiesces to the man’s “kindly” seduction, and, even in death, still refers to his deathly “stopping” action as a kindness. She dies and gratefully becomes death’s bride. The vampire rapes by willed submission.

“We slowly drove / He knew no haste –“: we follow the woman’s death with a slow, remorseless funeral procession, lyrically trailed by a reflection on what she sacrificed to be with this mystery man: “And I had put away / My labor and my leisure too / For His Civility –” (5-8). I love this line: “My labor and my leisure” — as it encapsulates the breadth of human life. We work, we play. Repeat — or don’t; stop (i.e., end your life). By “putting away” her “labor” (life’s work) and her “leisure” (life’s pleasures) for this man’s “Civility”, she loses everything for what essentially amounts to the man’s good manners. And, in so doing, her “unstoppable” life grinds to a deathly slow stroll, progressing from the periphery of society to the outskirts of nature — and beyond (9-12):

The funeral procession parallels the body’s decomposition and detachment from the living world. The “School” and “Recess” mirror the labor and leisure she left behind, and the “Ring” positions her as an outsider — outside of the community’s insular, inward-staring circle of social order and conformity. Death extracts the woman from the town circle, carrying her beyond the town’s agricultural pastures (“Fields of Gazing Grain” 11) — a regression from civilization to nature — and past even the “Setting Sun –“, a classic symbol of death (12).

“Or rather — He passed Us –“: the narrator falters and corrects herself: the sun, personified as “He”, leaves her, and not the other way around, taking His warmth with Him, exposing her over-exposed body to the cold (13). Presumably, her corpse is nearing her grave site, absorbing the night’s chilly, wet condensations (“The Dews” 14) that penetrate her light dress: “For only Gossamer, my Gown — / My Tippet — only Tulle — ” (15-16). “Gossamer” carries a double meaning: generally, “gossamer” refers to anything light, thin, or delicate; specifically, it’s defined as fine cobwebs spun by small spiders. The latter definition paints a Gothic image: the woman’s cold, murdered body wrapped (or trapped) in fine, filmy cobweb. Her tulle (a fine netting) “Tippet” bears a semi-religious connotation, as the tippet was a narrow scarf often worn by the clergy. But if there’s a religious undertone to her tippet, its sole effect is to contrast, and thus emphasize, her secular departure into the afterlife. E.Dick, a devoutly secular thinker, removes religiosity from dying. The semi-religious tippet is just as cold and lifeless as the body wearing it. Ultimately, the 4th stanza morbidly and comically highlights the abruptness of her death, as she’s suddenly unprepared for the cold night — spiritually and sartorially.

“We paused before a House that seemed / A Swelling of the Ground –“: the poem’s action settles before “a House” that marks the woman’s final resting place (17-18). The “House” — if it’s truly a house — seems both an earthly extension and a disintegrating man-made structure. Like vines climbing ancient ruins or weeds pushing through a cracked sidewalk, the “House” represents the inevitable downfall of structure and order to the re-emergence of chaotic, chthonian nature. The first two lines end with “Ground –” and, again, the final two lines end the same: “The Roof was scarcely visible — / The Cornice — in the Ground –” (19-20). This is rock-bottom. The woman’s final resting place. Her funeral procession ends not in the sky, or heavens, but in the ground. The poem’s lyrical cadence floats until it hits “the Ground”, bounces, and hits “the Ground” again. This is rock-bottom.

Yet, beyond rock-bottom, the dead narrator speaks from the timeless expanse of eternity (21-24):

Is this the “Immortality” promised by her seducer? After all, not everyone’s granted the magic of speaking beyond the grave.

What’s more, that she “first surmised” the apocalyptic implications of the “Horses’ Heads” (a reference to the four horses of Revelations) again calls to question her role as victim. Was her submission to death passive or active? Perhaps centuries of eternal afterlife neutralized the horrific memories attached to her murder. Or perhaps suicidal inclinations exposed her to the man’s temptations. None of which exonerates the man’s crime, at least in a legal and moral sense. But where’s the dead woman’s sense of violation, anger, injustice?

No matter. When stripped of their biology, all skulls seem to smile. 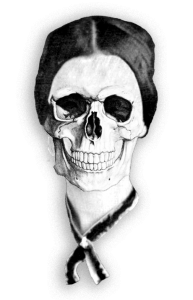 ‘The Flea’ by John Donne | Analysis