THE GIST OF HUGH HEFNER CAN BE SUMMARIZED WITH ONE WORD: incongruous. I don’t mean to mistake this notion, as many do with Hugh, with some romantic idea of mystery. The idea of Hugh Hefner is not obscure or ambiguous. He was always quite open and authentic in stating which platforms he stood for/on. But it’s that he simultaneously stood for and on these platforms that spurned his incongruity:

The opening of Teresa Carpenter’s 1981 Pulitzer Prize winning story “Death of a Playmate”Originally published in The Village Voice, Carpenter’s story covers the murder of 1980 Playmate of the Year Dorothy Stratten, who strangely enough was not mentioned once in The New York Times‘s 3000+ word obituary on Hugh Hefner. notes this cynical duality: “It is shortly past four in the afternoon and Hugh Hefner glides wordlessly into the library of his Playboy Mansion West. He is wearing pajamas and looking somber in green silk. The incongruous spectacle of a sybarite in mourning.” Thus, I’m not the first to point out that Hugh Hefner the playboy seemed to conveniently benefit from Hugh Hefner the activist.

Not to say that these personal benefits were maliciously driven– or even intentionally driven. I believe Hugh, the playboy and activist, was just being his authentic self. If anything, it seems more that Hugh conflated his perversion with activism, just as the latest rose-filtered obituaries mix Playboy’s voyeurism with human liberty. (Although, by this logic, Dolores Huerta could have better improved farmworker conditions by also starting a nude farmers magazine.) Hugh Hefner did pursue noble civil rights endeavors, yet he’s primarily remembered by what seemed to interest him the most: having a lot of sex with a lot of women.

And all the while making a lot of money off men who bought into/paid for his dream.

THERE’S NO QUESTION that Hugh Hefner helped change and charge social intercourse on sex, bringing the Kinsey era of sexual revolution into the cultural limelight. He may have won civil liberty awards for his absolute advocacy of free speech, but Hefner’s entire success thrived on free sex. And the sex-centric spring of Hefner’s political appeal aligned him more in the tradition of Marquis de Sade and John WilmotOFF TOPIC BUT WORTH THE MENTION: John Wilmot died at the age of 33 from what seemed to be a combination of alcoholism and syphilis. Marquis de Sade’s death was asexual, instead resulting from excess pulmonary fluid. And so if there’s any silver-lining gratitude to draw from the death of our 91-year old pervert, it’s for the life-extending heroism of antiobiotics. than of any American civil rights hero. During the conservative reign of post-war sexual stodge, Hugh Hefner’s libertine movement shook American sensibilities in a way that simultaneously refreshed and perverted our take on sex. This table turned following the rise of the 60’s & 70’s women’s movement and Jacques Derrida’s postmodern rail against “phallogocentrism”Derrida’s term for the privileging of the masculine (phallus) in the construction of meaning through language (logos) — a popular villain in feminist theory and an early inspiration to today’s “gender is a social construct” sentiments.: Hugh Hefner’s voyeurism symbolized to the feminist Left the oppressive, chauvinist spirit of manhood; to the libertarian Right, the bow-tied rabbit was the proper resistance to these prudish, screaming “libtards.”CASE IN POINT: Republished by Salon, Alternet’s Liz Posner’s article “Hugh Hefner damaged countless women’s lives. Let’s not pretend otherwise” asserts its titular claim by disagreeing with Hefner’s exploitation of women (fair enough), then ends on this note: “Certainly there is an enormous difference between Cosby’s drugging and raping unconscious women and Hefner’s quid pro quo with young girls who gladly took wealth and notoriety in exchange for offering their bodies at the altar of the Playboy Mansion. But what really separates one form of sexual predation from another?” This illogical leap from “an enormous difference” to “what really separates one form of sexual predation from another” exposes the fractured expectations of the feminist Left with regards to female liberty, accountability, and equality. The natural counter from the conservative Right is to state the obvious differences between Cosby and Hefner, resulting in conservatives ironically siding with a porno magnate, provoking a stronger Leftist retaliation in which feminists attempt to warp sexual liberty as an oppressive tool of Orthodox Christian chauvinism (SEE: Alternet’s Richard Eskow’s article “What Hugh Hefner Had in Common With Right-Wing Christian Doctrine”) — so on and so forth — until the whole thing gets so confusing and creepy that the rest of us have no other option but to swivel our heads left-to-right and say useless things like “What the heck?” and “Things didn’t use to be this way!”, etc.

To the common person, Playboy Magazine was simply for jerking off to/on.

Yet, Hefner’s popularity and notoriety shared a common denominator: Hefner’s unbending resistance to puritanical rule — be it Republican or Democrat, cultural or political, male or female. It was only ever the opponents to Hefner’s opponents who rightfully observed the playboy’s anti-puritanism. On the flipside, Playboy never reached the raunchy extremes of Hustler or SCREW (or 4chan, for that matter), earning Playboy Magazine the relative status of “sophisticated.” This anti-puritanical sophistication took form in perhaps the most redeemable feature of the Playboy brand: its articles.

Ayn Rand had her moment in Playboy Magazine, and so did the Irish Republican Army.

But perhaps what’s most intriguing about the Playboy articles is how they tapped into a side of popular Americana not often encountered in other mainstream magazines: the casual chaos and insanity of our celebrity culture. In 1965 Sean Connery detailed to Playboy the etiquette of hitting a woman. In 1995 Snoop Dogg revealed to Playboy that innocent bystanders are open game in an important drive-by shooting. In 1976 President Jimmy Carter admitted to “committ[ing] adultery in my heart many times,” and in 2004 Colin Farrell claimed that “[h]eroin is fine in moderation.” And in 2014 one of my favorite actors, Gary Oldman, gave his honest opinion on the Golden Globes: “They’re fucking ridiculous. There’s nothing going on at all. It’s 90 nobodies having a wank. Everybody’s getting drunk, and everybody’s sucking up to everybody. Boycott the fucking thing. Just say we’re not going to play this silly game with you anymore.”

If anyone’s earned access to this side of America, it’s Hugh Hefner. But to him this still wasn’t enough.

He had to frame it all with tiddies.

THE QUESTIONS LEFT ON MY MIND: Did Hugh ever feel sad about any of this? Did he ever feel remorse? Shame? A poetic sense of loneliness? Emptiness?

Given Playboy’s massive success, should we?

With the Playboy brand, Hugh Hefner struck a note at just the right time in American history to help spurn a revolution on free expression, a note that only the most skilled artists and musicians can strike — one that equally inspires both fun and discontent at the same time. Except whereas good art marries fun and discontent to a redemptive point of mutual acceptance, Hugh playfully masked the latter with the former.

Whether or not he himself was conscious to this is his only true mystery.

In the playful playboy image 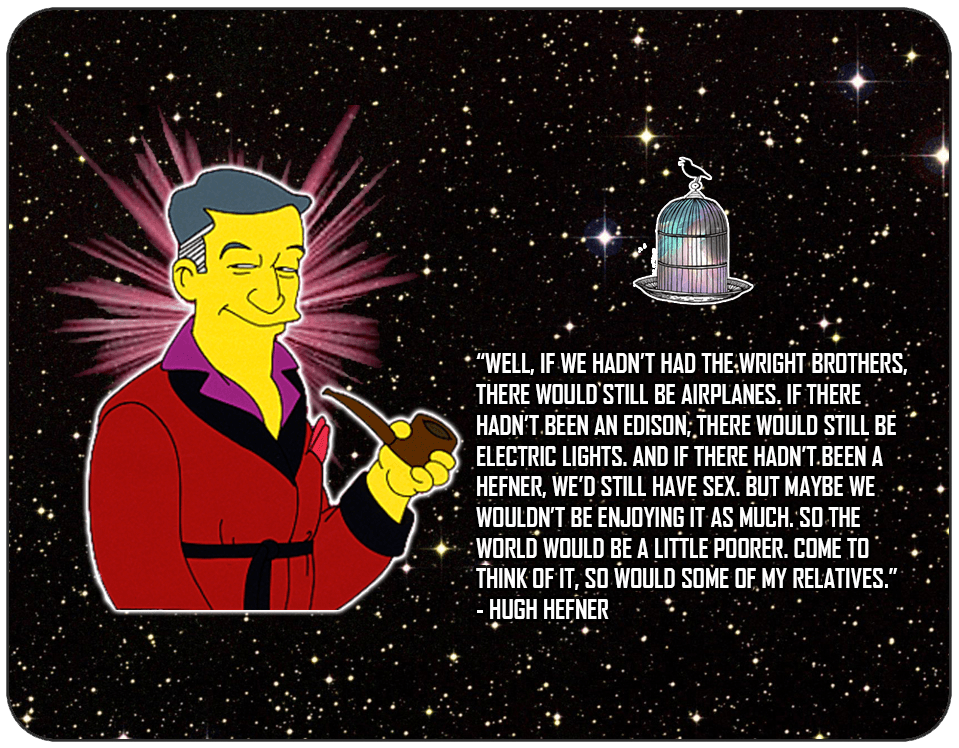 he created, Hugh Hefner sold a dream he claimed to be living. Yet, to no one but Hugh was this dream possible, and even then I’m not at all convinced of it. Ultimately, Hugh was just selling sex, a product already available to us. In this, Hugh was more American than artist, more perpetrator than innovator, and more human than we’re comfortable enough to recognize.

And he left us to reconcile these differences on our own. 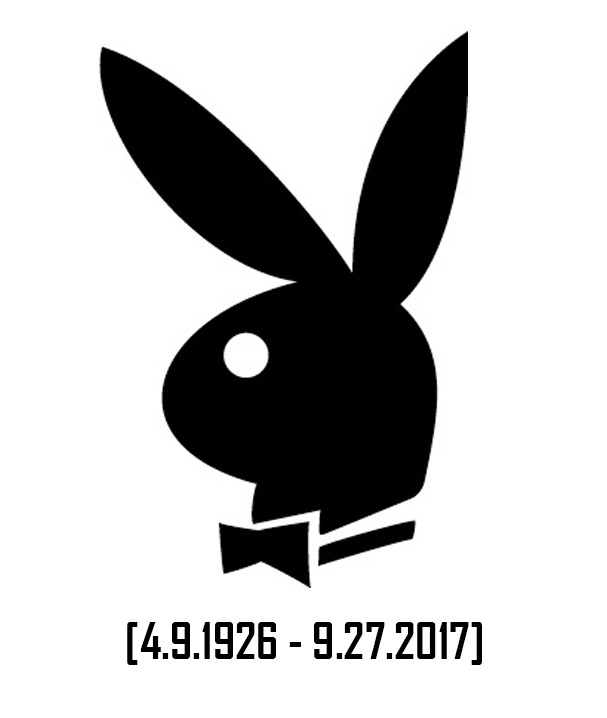 We, the Deplorable, Nasty People